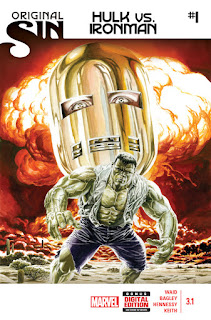 Super heroes fighting each other, in modern day comics, is no big news. Most events are focused, poorly, around such an idea. This, though, is one of the exceptions to that stereotype, and I'm okay with it here. While there is no mind control or manipulation going on, the circumstances building to the titular confrontation are unique, and work for the story.


This is an odd miniseries, though, mostly because of how much it differs from the book it was spawned off of, or just how little it has to do with that at all. It's odd in both aesthetic and just in the way that it functions, as it seems very confused quite a bit of the time.

It's a spin-off of, if it wasn't already obvious, Original Sin, one of Marvel's 2014 event comics as well as a comic I keep saying I'm going to review but haven't gotten around to yet. Whoops.

Anyway, Original Sin is based around the murder of Uatu, the Watcher. The heroes of Earth scramble to find out who could have done it, but in the second issue, things change forever when the Orb, a one of the suspects, reveals he has one of the Watcher's eyes and uses its mystical powers to explode a literal Truth Bomb, affecting all around. Thus it spawned countless tie-ins, er, I mean reveals, for the comic, including this one. The book would then get back to who the real killer was, and had just one more great issue before turning to complete and utter mediocrity.

But Original Sin is an event that stands out to me not because it's bad...but because it's bad with an effect. It's like an odd Yu-Gi-Oh! trading card. The card itself may seem ineffectual and boring, but, if you play a certain card at a certain time, it can drastically change the way the game works. Original Sin did that. Sure, not all of the repercussions were long lasting (Zen-Pool isn't a thing anymore), but the reason we have a female Thor, a Silk comic, and a Bucky Barnes fighting planet-crushing aliens in space (or at least did, thanks Secret Wars) was because of this miniseries.

"Oh, great, must be the same for this book!" You must be thinking. And the answer is...no. Not really. Original Sin: Hulk vs. Iron Man is a book that, to my knowledge, is referenced only one more time after the miniseries it spawns from ends. If you recall from way back in Avengers vs. X-Men: AXIS #1, Hulk begins attacking Iron Man after being hit by the Rage Wave. Why? Because of the revelations in this book. And that's it. Bruce Banner isn't even the Hulk anymore, so it's not like he can just walk up to Tony and say, "Hey remember how we fought in your city of Troy after the Watcher died? That was weird."

It's part of the reason why this book is so forgettable. Part of me wonders if Marvel published it only because of the title, sort of like their version of click-baiting. Okay, it's not that bad but this miniseries seems pointless. Why not just have it as an arc in the main series books? Neither the Iron Man nor Hulk books were being effected by these events. I speculate that's because the sales for those books were, at the time, fine, so books that needed a boost like Nova or Mighty Avengers did get a tie-in. Still, this just seems out of place, particularly because it's also not mentioned in great detail later on in the series, since we return to the mystery element and both Iron Man and Hulk become smaller players in the larger game (it's been a while since I read Original Sin so forgive me if I'm mistaken...but I doubt anyone else remembers, either).

To get into the book itself...I don't even know how to number the darn thing. It's promoted all the time as Original Sin #s 3.1-3.4, but the books themselves are Original Sin: Hulk vs. Iron Man #1-4. So which is it? I'm going to assume it's the former, but that just seems ridiculous. Not to mention the fact there's another Original Sin spin-off Thor and Loki: The Tenth Realm number 5.1-5.5, so why not just combine them and have Original Sin #3.1-3.9?

Agh, whatever. It's not a major problem, but it would be confusing for anyone picking up individual issues of the series rather than the pretty cheap trade collecting the four issues out now. We're off to a promising start with the creative team, though. Both Mark Waid and Kieron Gillen crafted the story for these books. Aw heck yeah! Mark Waid wrote Kingdom Come, one of the best DC Comics ever! I wouldn't have recognized Kieron Gillen's name at the time, but he should be recognizable to anyone who reads Star Wars: Darth Vader. Except, there's a problem.

See, I'm perfectly fine with two writers co-creating a story. Why not? It helps them solidify ideas for the audience. What I do have a problem with is that they have basically their own creative units under them for separate issues. What do I mean by that? Mark Waid has a different artist, Mark Bagley, than Kieron Gillen does, Luke Ross. Not only is it obvious, but it's pretty annoying as well.

I prefer Gillen and Ross over Waid and Bagley. Waid is a perfectly fine writer, but he doesn't quite nail the story or characters as well as Kieron Gillen does. The first issue is good at setting up the friendship between Tony and Bruce, and has a good reveal to set up the rest of the story at the end, but that's about it. The dialogue in both the first and third issue is off, and Tony's character seems a bit...weird. He gets the older, younger Tony well (though that is where most of the weird dialogue comes from), but the older Tony does not seem as wise or matured as he should be. He seems to think he's two steps ahead while still being two steps behind the Hulk and Bruce Banner. Not to mention that he keeps getting random visions.

Those visions? Yeah. Sure random, but what makes it worse is that they are latent memories. And no, it isn't something like a flash memory where you'll stumble upon an area and dig into your subconscious. Take this example:

The context of this is that Tony is escaping the Hulk, who is hunting him and just beat the punch out of him in a fight. Why does he have this random memory? How does he have this random memory? Either his brain is his worst enemy (and no, it's not, it's a beer bottle) or Mark Waid just really likes his cliffhangers. The first issue ends in a similar way, though it's not quite a cliffhanger.

The memory/visions are one of the things that hold this book back from being good. Tony never sees these memories at a certain point in time. Not only that, but the odd thing is that he sees his memories while Bruce sees the same ones. See, the thing is that because the two were so close to each other, and both had a secret so dark, that the Truth Bomb swapped their latent memories, allowing Bruce Banner to see Tony's side of things the day before he became the Hulk. It makes for an interesting piece of the puzzle, and is explored to a great end by Issue 2.

One could say that the random flashes are because of the power of the bomb, but I would say that it's a narrative contrivance that the writers could not work around and decided, "Screw it, as long as we have the reveals, we're okay," which is where things fall apart for this book, as well as it's anchor series. Original Sin was all about it's big reveals and red-herrings. But the reason I still really like Issue 3 is because there is build-up that makes sense given the context of it all, and given how big of a cliffhanger it is. Issue 1's cliffhanger works in the same way, but lacks some dramatic tension because we already know that something happened between the two. So, in this instance, I suppose you can blame the title. This is another reason why I think this should have occurred in the pages of either an Iron Man or Hulk book, but we still have other elements to cover.

Like the artwork. When I read through this again, I noticed that things were different. How different? Well it seems that neither Ross nor Bagley understands age differences, as Bruce Banner sometimes looks older in the past than in the present. But, for every injustice, there is a justice. That justice?


The Hulk looks amazing in every page he is on. He is menacing, and terrifying. The fourth issue, where that image is from, especially highlights this, and the artists do an amazing job of showing things from Tony's perspective. The shadows and massive muscles all appeal to this thing being a bringer of destruction.

Another thing of note that is sort of weird about this series is the covers. Three of the four feature a retro style on them, be it in the background or the foreground.

For some reason, J.G. Jones decided to put the golden armored Iron Man, or the really old Iron Man/ Grey Hulk on the covers. I suppose it's to evoke that older time period that Banner became the Hulk, but as is established, that was not so long ago. The book reflects things as if the Hulk was born maybe a decade or so go. And in the series, Iron Man stays in his gold/black armor (which looks awesome by the way) and never the older forms. It's odd, but if you read the trades, it can be ignored.

The highlight of the series is the payoff of the eventual fight, which for reasons that are spoilers has more than one implication. Things do wrap up in a bit of a rushed way, but in the story is makes sense and leads to some interesting developments. The series itself ends on an odd note, with a casual optimism that leaves enough avenues open for this to be explored again at a later time, though that has yet to happen.

Original Sin: Hulk vs. Iron Man (number whatever you want, I guess) is a good, but rather flawed series. It's perfectly readable, but isn't any amazing miniseries. What's good is that it never feels like a "what-if" story, but the bad is that it is treated as such nowadays in Marvel lore. The writing is at times clunky and the memories that Tony gets are randomly placed and timed at annoying points but for Bruce Banner is quite good. The same can be said for the artwork, and the fight scenes/ Hulk in general stand out from the series.

If this were ever to be adapted into something else, be it a movie or TV show, I feel that it would fare better. In terms of the MCU, I think this would be a great story to see in a potential Iron Man/ Hulk movie. Perhaps it depends on how Captain America: Civil War does with the whole "hero vs. hero" thing it has going for it. But for now we have our comics, and for me that's good enough.

Next time we must sadly come to the conclusion of our long, perilous journey alongside an angst-ridden teenage boy and his dreams of destruction as we check out one of the most well-known, comics of all time: Superman #75.