"Return of the Jedi" Review 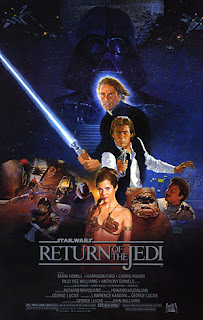 Full SPOILERS for film...but if you haven't seen it then what are you waiting for?

Ah, it's nearly here. That great, big, massive event that we've been waiting for all year long. We've been hyped for it for long and now it's finally upon us. That's right.

Christmas is next week, guys!

Welp. Alright then. We better put our "Star Wars" pants on and talk some mad stuff about the galaxy far, far away.

Let's talk Return of the Jedi. Why? Well because it's the last film in the series up until this Friday. If you haven't been reading the comics or novels building up to the film, then A) You really haven't missed that much and B) This is the most recent thing to happen in the franchise. For me, it really is.

Sure I read "Shattered Empire" but it was decent and only had one real good issue, and that was because Luke Skywalker was in it. And since it was Jedi Luke, it was also cool Luke as well.

To talk about a "Star Wars" movie, especially now, treads on dangerous waters (unless you're talking about "Phantom Menace"/ "Attack of the Clones"). The original trilogy has been brought to brand new light in 2015. "Star Wars" is officially back in full-swing. This is either going to be a good thing or a really, really bad thing. Remember the last "Star Wars" film everyone was hyped for after a long stretch of time? Yeah, let's keep our hype in check sometimes, guys. Lay off buying ever single Kylo Ren action figure until we find out he's actually as cool as he looks.

But keep his lightsaber, that thing is awesome.

For the longest time, Return of the Jedi was my favorite of the "Star Wars" movies. I thought it was the best! You had the exciting escape from Jabba, big battles, Luke revealing his relationship with Leia, the climactic battle over the Death Star, and the big battle in the Death Star. However, I've grown up and come to realize that, no, this isn't the best, and, no, it's actually not my favorite. Do I still enjoy watching it? Oh heck yeah. And the part that used to bore me the most, the opening scenes in Jabba's palace until Luke arrives, I think are very well done nowadays.

Let's get the bad out of the way first so we can...

Okay, yes, I know, I know, you've heard it a million times. "The Ewoks killed the movie for me!" But, for me, that's not the case. I really do like Wicket, and his inclusion into the story. He provided a good sidekick for Leia and was actually pretty fun to meet. He was the most lighthearted of the bunch and was enjoyable to have around.

The problem is the time spent with the Ewoks and how they defeat the Empire. First off, we are with the Ewoks way too long for my taste. Sure it's funny that they worship C-3PO, but, I just don't find myself that invested in the Ewoks as much as just Wicket. We didn't need to see their whole tribe partying and getting ready to roast Han, it wasn't that great of comic relief.

Every time they would cut back to the Empire, or Luke being by himself, just angered me. I wanted to stick with that story, see what was going on there. Luke and Vader's relationship is obviously the main crux of the movie. It comes up in almost every major turn. Luke has to go visit Yoda, Ben brings up Vader. Luke approaches Endor, Vader notices Luke is there. Luke leaves the group, Vader goes to chat with him.

Some of the ways that they defeat the Empire are clever, like with the logs or the trees smashing into the AT-STs. But regular sticks and stones? It makes the Stormtroopers look just pathetic. This is contrasted against how intimidating the Empire appeared in the last film. They swooped down into Hoth with no problem. They took over Cloud City with no problem. They had the Rebels on the ropes and now, with the 501st squadron (the finest of all the Empire's troops) they can't defeat the Ewoks? No way! It's just unbelievable, which is difficult to say in a "Star Wars" movie.

Jabba's palace in the beginning can also be a little boring since we're, once again, forced to just follow around R2 and 3PO, but since we're actually hanging around with this mysterious Jabba for the first time ever, it sort of makes up for it. Once Leia and Chewbacca arrive things also pick up significantly.

Yes. This movie relies totally on Luke's character. This really is Luke's movie. In terms of the original trilogy, this is our first true Jedi since Ben. Even Yoda gives him the stamp of approval: Luke is a certified Jedi Knight. Is he a powerful Jedi? Well in his own way. Is he a particularly good Jedi? Well, no, but that feeds into his character. Luke's journey comes to an end here and it is a fantastic ending. Every moment you can tell that this guy was messed up in his last encounter with Darth Vader and he's come back stronger.

Just put the last image of him in "Empire" against the first of him in "Jedi." And he doesn't mess around anymore either! Granted, this is back when the Jedi "code" was a little more ambiguous and it makes you wonder if, during those years in training before rescuing Han, Luke even learned about the Jedi code. Still, he isn't taking chances anymore. I don't agree with him going to shoot Jabba, but I get it. And not to mention that Luke's body count rises probably into the dozen-area during the big fight on the airship over the Sarlacc Pit (RIP Boba Fett, I hope you return with an army of Mandolorians...led by Darth Maul).

I think one of the more overlooked moments of the film, and "Star Wars" in general, is Luke's conversation with Vader before they head up to the Star Destroyer. Vader taunts Luke constantly, even to the point where he takes his lightsaber and calls him a Jedi. Luke, though, retorts by saying he knows that Anakin is still in there. Whoa! It's once again a testament to the directing and writing of the film that we can almost see Vader's reaction when Luke says that. We know that part of Anakin still exists, as Anakin, not Vader, is Luke's father. When Luke says that, it's telling that if it were anyone else who said that, Vader would have cut them down. But not Luke. Why? Because no matter how evil he is, that's still his son. It was his greatest weakness before and it's his greatest weakness now.

Literally. Their final confrontation on the Death Star is absolutely marvelous. And it's also the reason that Luke is not going to be evil in "The Force Awakens," because, if he is: then this whole movie is meaningless! Luke's journey was for nothing! I don't know if it was someone something said just to troll someone or if it's our modern day fixation on villainy in fiction that people want Luke to be evil, but nobody seems to get that it would be wrong for that to happen.

Luke says, straight to the Emperor's face after he has the perfect chance to kill Vader: "You're wrong Your Highness. I'm a Jedi, like my father before me." Boom. Done. Jedi Knight. Get over it. Luke's journey is at an end, and immediately after, it's now time for Anakin Skywalker to return and cast the Emperor away as he should have done twenty-two years ago in "Revenge of the Sith." Anakin finally completes his task, Luke completes his, and the story wraps with Luke laying eyes on Vader in a tender, heartbreaking moment.

Another thing great about the movie? The fight over the Second Death Star! Wedge and the crew aboard the Millenium Falcon are a ton of fun to watch and it's great to have Lando as our excitable comic relief. There's also great tension as they're just basically stuck up there, waiting and waiting to go in but down on Endor they're using sticks and stones to break the Empire's bones so, you know, that takes a little while.

The escape from the Death Star, though? It's paced perfectly and has unforgettable visuals and homages to the previous attack run that destroyed it.

And, well, the ending is very satisfying. The Ewoks have their little party, Luke burns his father's dead corpse, and we get two final group shots of our heroes. It just wraps in a perfect little bow that makes me feel like there's no need for an Episode 7.

Then again I don't work in Hollywood and didn't pay $4 Billion for the rights to "Star Wars" so there's that, too.

Anyway, Return of the Jedi is a great movie. I went back and forth on whether it was that much better than "Revenge of the Sith," but in the end, Luke's journey just has far more impact than Anakin's journey ever did. His resistance of the Empire is felt, his moments with Darth Vader are great, and it's just a great ending to his story. The action is also great in this movie and there are tons of either funny or dramatic memorable moments to be brought to the table. Everything was stepped up visually, particularly Luke's lightsaber (my favorite of the franchise, FYI), and even the music gets a little better. Nothing that really jumps out, but it fits the bill great. John Williams never fails.

I would recommend watching it before you see the seventh film...but I already know you've got that planned out.

Posted by Unknown at 11:31:00 AM
Email ThisBlogThis!Share to TwitterShare to FacebookShare to Pinterest
Labels: Film Reviews, Star Wars