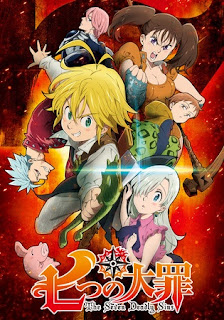 While it does disappoint me quite a bit that I won't be able to include in my candidates for favorite anime of this year (as it aired last year in Japan), I still feel it's worth talking about, considering how well-received it's been for us on this side of the Pacific. Besides, I've enjoyed it more than what I've seen from most of this year anyway.

Seven Deadly Sins, or Nanatsu no Taizai is a 2014 fantasy-action anime with your expected Shounen-battle series tropes set in something similar to Medieval Europe, specifically England, as it takes place in "Britannia" before the human and non-human worlds were separated.

Much like another Shounen series I rather enjoy, our main character, and for the most part a viewpoint character into this world, is Princess Elizabeth, who finds a tavern master Meliodas and his talking pig Hawk, captain of scraps disposal, and they begin their quest to find the legendary Seven Deadly Sins knight group to combat the kingdom.

Why? Well, because those within the kingdom are corrupt, and the Holy Knights have essentially thrust the blame onto the Sins for crimes they have unknowingly committed, and thus, Elizabeth knows she must gather them to combat the Holy Knights to reveal them and take back the kingdom!

As I said, our main character is Elizabeth, but we do also focus a ton of time on Meliodas and his backstory. It's similar to Fairy Tail in this regard. Lucy is our main character, lest we forget, but Natsu is also our main guy, so in that regard, there is a balance between the female and male lead. Hawk is our fill-in Shounen animal for comedic relief, similar to a Puar/ Oolong, or to be more recent and fitting in the paragraph, Happy. Which isn't bad, those are some cool cats. Heh.

The story for "Sins" is easy to remember based in our simple it is. Go find the Sins and retake the kingdom. Cool, seen it before. What makes the story interesting are the characters we meet along the way. Specifically the Sins, yes, but there are some Holy Knights worth noting, such as Gilthunder and Guila that had their own interesting bits to the story.

This anime could easily have been a bad series because of this. If the characters were rich and interesting--for the most part--then it would have fallen flat. It would look nice, but it would still be only average at best. Akame ga Kill suffered from this as it's characters were somewhat interesting but each new addition only bogged down the remaining cast and there was never any time to get to knowing a character. Each Sin we meet in this series comes interesting and has a memorable introduction to the series.

There is a little bit more story later on as the series grows more linear when it hits its climax at the episode 17/18 point, and there again is an awkward introduction to a character that has a lot of potential, but one that is mostly there to facilitate the ending of the season as we have it. It came off as forced and incredibly random/ convenient for it to take place in symmetry with what was happening with the Sins.

So if it's the characters that are interesting then let's talk about some characters. Elizabeth is at first just sort of a blank slate of innocence. Meliodas hits on her in some pretty extreme ways and she just sort of takes it and doesn't refute any of it, with Hawk being the one to have to defend her. But she does grow in her own strength and personal fortitude as the series progresses. Her presence is always welcomed and she was a good means of keeping the spirits of the group up.

Meliodas has some good character and a mysterious backstory, but he's also the character we've seen dozens of times before in a series such as this. What's good about him, though, is that he has a more laid-back demeanor. He rarely shows his true feelings and even in a fight he seems very calm and collected. It's explored in one episode in particular in a fight that he seemingly does not struggle with. That gave him a little more character development, for me anyway. He feigns his confidence, and if it's real, you'll never really notice it. He's very relaxed and because of his shady backstory and powers, in a fight, you can't really know what to expect from him.

Hawk was just great comedic relief, being the captain of scrap disposals to Meliodas's Captain of the Seven Deadly Sins. At first, Hawk seemed like he was just going to be a grating character on the series, with silly little shenanigans thrown in and bogging it down. But he actually helped sustain the light-hearted attitude of the show and overtime, became a very welcomed member of the show and he was missed during longer battle sequences, where he was off hiding or hanging with Elizabeth.

Each Sin is a memorable character and their own "Sin," based off of the seven cardinal sins, does feed into their characters in an interesting way and helps enlighten them as well as their backstory for the viewer. They all have their own unique abilities that also help their character grow and their relationship with each other is so much fun it's almost unbelievable.

Some of the problems with the series, though, stem from just some innate questions that are never really answered. Why are these seven people the Seven Deadly Sins, like who branded them? Was it the king? Well when did that happen? Also, what really did happen in the previous Holy War, and on that day ten years ago? Meliodas's backstory is brought up quite a bit and we get some shedding of light on it but it's otherwise forgotten in the final battles. Really only three of the seven sins have had their complete backstory told, and those were in some of the best episodes of the season.

But, given that there's a Season 2 coming up and I have no idea what route they may take, perhaps we will learn more about these questions next year.

I really found myself enjoying the art and animation of this series, too. The art was very clean and had tons of vibrant colors that popped out of the screen. It made the series incredibly easy to watch, and I wish more anime nowadays had this sort of look to it. I'm not saying it was the greatest thing ever, no...this is no Fate/ Stay Night unlimited blade works art/ animation or anything...but it was really great. The animation was also very fluid, never really breaking unless you really looked for it. Toward the end, and in a fight scene or two, you could notice, but it was otherwise just fine.

The fights in this series were all just a ton of fun. The final battle is somewhat predictable and while it doesn't really come out of nowhere, it is a little more over-the-top than normal and stands out--not in the best way--against the remainder of the fights in the series. The different magical powers were cool to see and sort of all fed into the characters and their actions as well. There weren't too many fights that were sort of low-key. Each battle exemplified just how strong the Sins, and some of the Holy Knights, really are.

The music fit the series very well, composed by the ever-great Hiroyuki Sawano, into the environment that the show is providing, particularly during the down or comedic moments where the characters are just hanging out and interacting. The battle music isn't too memorable but there are some songs chosen in the final battle that stand out. I also prefer the second opening to the first just because it fits the overall tone of the series better, that being fun and adventurous. The English Dub was also really good, each character's voice and tone fitting well with their personality.

In the end, Seven Deadly Sins is a good series. It isn't going to break any great in its genre but that's not what it wants to do, it wants to entertain the viewer for 24 episodes and that's just what it did. The ending was enough of a mystery for me to want to check out what happens next, and if the quality is the same, I think I will. I'd recommend you do as well.