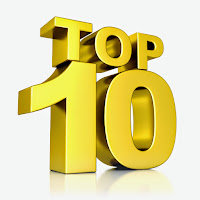 I don't feel the need to predicate this final part of my 2015 trilogy with explaining why I need to denote in the title "what I've read"...mostly because it should be obvious that I haven't read every comic that's come out this year. That's basically impossible.

Still, I've got a solid selection here, I feel. I tried to read some pretty good series this year and I think it definitely paid off. There were also several times where I could barely decide between one issue or another. I've also placed a strict rule of only one issue per series, otherwise Justice League would pop up like three times on this list.

As an "honorable mention" of sorts, too, I'll say that the Marvel Original Graphic Novel Rage of Ultron was an incredible story and was the best Ultron story we've gotten in a long time. It was engaging, gripping, had great art, and really made you feel for the robot and his father, Hank Pym, both in the past and in the present.

So, without further ado, let's check out the list.

Starting off this list is a series you've probably never heard of, and that's okay. Because we'll work on that in the coming year. But Unity is a series I would highly recommend check out. It just came to an end with it's twenty-fifth issue, and was a great journey to go on. It saw the rise and fall of many great heroes, and this issue highlights Ninjak in particular. It's a story of a soldier separated from war and family that knows he misses it profusely. Matt Kindt write Ninjak in a great way--exemplified by his Ninjak series--showing exactly how such battles can affect a regular-state human being.


The end of an era. I was sad to see this series go but was very pleased with the way that it ended up going out. It did feel like a grand series finale, even if the situations within the issue itself weren't too huge. It was the culmination of what Warren Ellis and Brian Wood were also building toward, setting up Cullen Bunn for the perfect kill. As the cover shows us, there is finally a bridge between Moon Knight and Khonshu, as the relationship had been wavering over the past few issues. This issue, showing a misguided church of Khonshu, allows for some more interesting imagery that has allowed the series to stand out as well as finish on a very powerful image of Khonshu comforting his favored son.


As of late, Secret Wars has been waning in my interest. Both the delay and a weaker story have resulted in this. Even then, after the monumental first issue, the story did move places, but it wasn't really excellent. This issue elevated the story, raising the stakes and showing the fearsome resolve of God Doom. It was also the first encounter of our main heroes and Doom. The standoff between Doom and Reed Richards was chilling. Doom didn't reveal any harsh expression, but just seeing the two stand against each other was great. This issue set Secret Wars to be a great, epic series. Sadly, though, the rest of the series has not quite delivered.

This issue revolves around Divinity, who now has unstoppable, godlike abilities, trapping the warriors of Unity in their own minds for what, to them, seems to be decades of time. And only Ninjak has the way to stop them. This issue, and Divinity as a whole, stresses mind over matter, and certainly mind over muscle. Unity barges into this issue looking for a fight, but Divinity puts them down in that regard quite easily. The journey that Ninjak undergoes is marvelous to watch, and is paralleled perfectly by Divinity's quest to find, basically, the power of God. The art in this issue is excellent and the writing is nearly perfect for our two main characters. On the whole, Divinity may be the best miniseries to come from 2015, and this issue, as it includes Unity, really puts it up there.

It was a tough call between this and Issue 45, but ultimately, I had to go with this. The start of the ongoing saga. It had tons of twists and turns and left me near speechless by the end of it. The writing by Geoff Johns was as good as it's ever been on the series and Jason Fabok continued to kill it on the art side of things. This issue caps off the Amazo Virus and, simultaneously, puts us right into the heart of the new conflict by bringing us the return of Mister Miracle! The issue focuses on him for quite a bit before we go back to Earth where, well...bad things happen. "Darkseid War" continues to be an insane series that DC is bringing, and it started here!

Ah, the ever-classic "start a series then reboot it later in the year" situation. Good times, eh Spider-Gwen? Man, I really can't get over this. Anyway, Hawkeye! Yes, it's superior to BOTH major event books from this year, and it's about some deadbeat super-hero having problems with his former partner and constant awesomeness, Kate Bishop. As per usual with this low-key books, it's the characters that really set this book apart. Kate Bishop was a major player in the most recent incarnations of the book and she comes back in full here. Clint is also great, as we get more of him and not younger him as we had just seen. Ramon Perez's two separate art styles for the present and future also provide a keen difference in atmosphere for the two time periods.


Grayson was a series I disregarded after Forever Evil because, well, it wasn't Nightwing. It was Dick Grayson as himself and as a sexy super-spy. That really didn't appeal to me. What DID appeal to me was Dick Grayson finally returning to Gotham and meeting up with most of his former allies. It was a very heartfelt reunion, and each beat fit perfect in the story. As a reader, you could feel the family ties being knotted back together in each meeting. The two that stand out the most, for me, are when he meets back up with Jason and Tim (as Jason punches him in the face and Tim berates him), as well as when he reunites with Damian (in which Damian gives him a big hug, like he's seeing an older brother again). This, of course, would help set up the events to play out in the ongoing weekly Batman and Robin Eternal series, but it was nevertheless an amazing return for the original Robin.


A departure from the norm at the time, Batman #44 brought us an origin story, of sorts, for new villain Mr. Bloom. But, beyond that, it was a refreshing return to just basic detective-things and crime fighting for Batman. The issue revolves around a boy who dies from a steep fall after being shot--however, no planes have been around the area and no other way for him to fall has been determined. Thus, Batman takes to the Penguin to see what he may know. The result? Pretty haunting. It's all incredibly reminiscent of the story of Icarus, both regarding the boy as well as for Batman. They simply flew too close to the Sun. And while "Endgame's" final issue certainly had a lot of power and gravitas behind it, this one's sense of mystery and the style that Azarello and Jock bring certainly put it on a whole other level. It makes me want to see more of this Batman with those two behind it.

This issue seemed to take the comic world by storm when it first came out, mostly by the ending, but also getting to see Dick Grayson in far more action with the old Bat-family, specifically with several Robins new and old. It's interesting to see most of Batman's sidekicks (Damian and Batgirl notwithstanding, as they're off on their own thing apparently) interact with each other, like seeing Dick Grayson pal around with Harper Row, as well as the new hero Spoiler try to work with Red Hood. The introduction of Cassandra Cain is also very welcoming, and, as I said, the ending is pretty exciting. In terms of a Bat-book, it's almost as perfect as it gets. It was a tough draw between this and Batman #44, but in the end, this book was just a little more colorful and seeing the characters work off each other puts it up just a bit. Dick Grayson taking charge again, as he was doing prior to the New 52--though the New 52 is technically over...whatever--is also a refreshing take on this story.

*mind explodes thinking of book*
Okay, hmm...how to explain this comic book...
It's manipulative! Well, sort of. It's meta! Well, yeah, DUH. It's...it's...
It's honestly perfect. It tells its own compelling story while involving the reader and sending one, simple message with it: the comic OWNS the reader. And it's true! A good story is as good as any manipulation. You cannot stop reading. There's a point where the villain, the Gentry, has its own panel challenging the reader to read on, telling them that if they keep reading, he gets stronger. So, technically, you could stop reading, and he'll stop growing...but how do you know that without reading?
Apparently, this book is meant to take place on our own Earth, Earth-33, but I think they mean that mostly in that you are READING it in our Earth, thus allowing you to affect the events of the story. And out of any comic I've read this year, I had the most fun with this one. It was the most engaging read I've had, possibly ever. If you read one comic this year, I highly recommend it be this one. If you're a person that likes stories that challenge you, that make you question story and motive and one that has really good art, I say this one is right up your alley. It's one that, each time I read it, I find great enjoyment in. It's hard to put down.
And it's hard to let the Gentry lose.

So, that's it for 2015! It's been a fun year, doing this blogging thing all year. I hope you've enjoyed yourself reading this blog this year! I know the schedule was a bit on the weird side sometimes, and I'll do my best to do better in the future.
As for next year though, all I can promise is the end of a certain arc we've been looking at as well as the start-up of some stories a little more...valiant.
See you then, and Happy New Year!